THIS ARTICLE WAS ORIGINALLY PUBLISHED BY NAR’s Home Ownership Matters and written By Anthony SanFilippo
To view the original article, please click here.

Age is Just a Number When It Comes to Community Preference 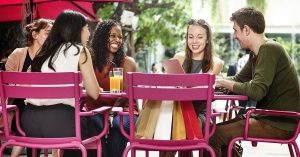 According to a new report from the National Association of Realtors® (NAR), both millennials and those from the silent, or greatest generation, agree – walkable communities are the preferred way of living.

The trend toward smaller homes in neighborhoods with convenient walks to shopping and dining options is no longer something just for the 21-to-35-year-old demographic, but it’s the favored choice of senior citizens aged 73 and up.

The report, based on the 2017 National Community and Transportation Preference survey showed that 62 percent of millennials and 55 percent of respondents over the age of 73 would rather have easy access to restaurants and shops and shorter commutes than a bigger home.

These same respondents would live in a smaller home – such as a townhouse or even an apartment – to have that ease of access.

“Realtors® understand that when people buy a home, they are not just looking at the house, they are looking at the neighborhood and the community,” said NAR President Elizabeth Mendenhall, a sixth-generation Realtor® from Columbia, Missouri and CEO of RE/MAX Boone Realty. “While the idea of the ‘perfect neighborhood’ is different for every homeowner, more Americans are expressing a desire to live in communities with access to public transit, shorter commutes and greater walkability.

An overwhelming number of respondents – 88% – said that having amenities within walking distance increased quality of life, while 70% said walkability, short commutes and proximity to highways are important factors when deciding where to live.

Additionally, the report showed there was a five percent increase over the past two years in the number of Americans, now 53 percent, who prefer to live in communities containing houses with small yards but within easy walking distance of the community’s amenities, as opposed to living in communities with houses that have large yards but they have to drive to all amenities.
But there is the rest of the population – those generations between Millennials and the Silent generation who make up a majority of homeowners. This group still prefer things to be quiet and suburban or rural.

A total of 55 percent of both Gen-Xers and baby boomers say they have no problem with a longer commute and driving to amenities if it means living in a single-family, detached home.

Additionally, those with school-age kids in the home prefer conventional suburban communities. Sixty percent of all responders with kids in school said they prefer larger homes and yards that require driving, and that number jumps to 63 percent for millennials with kids in school.

One reason for this maybe that families place education higher on the priority list than convenience of amenities like shopping and dining – or even access to highways.

The survey also found that gender played a role in community and transportation preferences. Young women in particular are more inclined to prefer places to take walks (54%) or prefer having access to public transit (39%) than young men.
Of note is that nearly half of all millennials preferred living where there are short commutes, regardless of gender.

The survey of 3,000 adult Americans living in the 50 largest metropolitan areas was conducted by American Strategies and Meyers Research in September 2017.